To Vaccinate, Or Not?

The development of vaccines to protect against potentially killer diseases likes polio, measles and pertussis (whooping cough) has been widely hailed as one of the crowning achievements of medicine in the 20th century.  As the table below shows, the incidence of these, and other diseases, decreased by between 95-100% once vaccines were given. Many of us can likely remember hearing stories of family members who died from these diseases, or who were otherwise seriously and permanently affected from having suffered from these diseases. But are we taking this standard of care for granted?

According to a recent study reported by Reuters, “Nearly half of babies and toddlers in the United States aren’t getting recommended vaccines on time – and if enough skip vaccines, whole schools or communities could be vulnerable to diseases such as whooping cough and measles.” 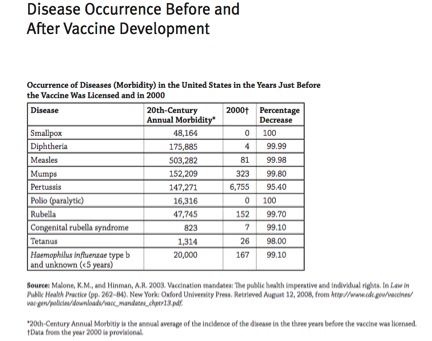 We are seeing the effects of “under-vaccination” already as outbreaks of pertussis (whooping cough) are becoming increasingly common. Medical researchers have discovered that boosters are necessary to keep immunity at proper levels for adults, especially pregnant women. The Centers for Disease Control and Prevention website is an excellent resource that provides guidelines for infants, children and adults. Evidence-based, scientific studies have proven the efficacy and safety of these vaccines, and there have been no studies to date that reveal vaccines to cause any harm. Still, some parents appear to believe that their children are better off without them, and one study revealed that “one in eight children went under-vaccinated due to parents choices,” (Reuters).

What do you think? Do you vaccinate your children? We would love to hear your views on this important subject.

All About Camps & Retreats

All About block grants for Children with Special Health Care Needs