May has been observed as Mental Health Month since 1949. One in five Americans are affected by a mental health condition in their lifetime — as many as 43.8 million — and everyone is impacted through family or loved ones. A main objective of mental health awareness is to fight the stigma surrounding those living with sometimes serious conditions through education and support and to improve the chance of recovery for those in need. 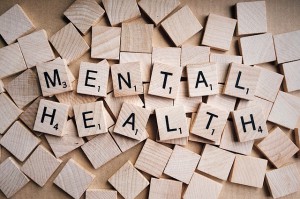 Everyone has stress and difficult emotions on occasion, and this is completely normal. Mental illness, however, is any condition that makes it difficult to function in daily life. It can affect relationships or job performance, and is caused by any number of complex interactions within the human brain. Mental illness can range from anxiety or mood disorders like depression, psychotic disorders like schizophrenia, eating disorders, or addictive behaviors.

Mental illness is prevalent in homeless populations, with 25% living with serious mental health conditions and an estimated 46% with any mental illness. Sixty-four percent of jail inmates, 54% of state prisoners, and 45% of federal prisoners report mental health concerns. LGBT individuals often deal with body dysmorphia, physical or emotional abuse, or feeling unsafe at school or work which can deeply affect their mental health. Adopted children are almost twice as likely as children brought up with their biological parents to suffer from some form of mental illness. Thousands of immigrant children have been separated from their parents/families under the Trump administration’s “zero tolerance” policy, and now face an increased risk of profound physical and mental health problems. Psychologists who have visited detention centers worry that the living conditions in these facilities will add to the trauma families have already endured, though the impact is difficult to predict as no research has been done on children who have been forcibly separated from their families due to the inherent ethical concerns.

The United States is facing a growing shortage of mental health professionals trained to work with youth — at a time when depression and anxiety are on the rise. Suicide was the second greatest cause of death for children from age 10-24 in 2017, after accidents. Mood disorders such as depression or bipolar disorder are the third most common cause of hospitalizations in the U.S. across ages 18-44. Serious mental illness costs America $193.2 billion in lost earnings per year.

A new study shows the economic costs of untreated mood and anxiety disorders among moms exceeds $14 billion dollars through the first five years of a child’s life alone. Fewer adults experiencing psychological distress are being treated by a mental health professional. Of those reporting foregoing mental health care, 13% said they could not afford the cost of care, 12% reported that their insurance would not cover it, 10% indicated that fear or embarrassment kept them from seeking care, and 8% reported that they did not know where to get care.

The growing concern is that people who work could potentially lose Medicaid coverage by not meeting the specific requirements set differently in each state or by getting lost in administrative obstacles to verifying work status or documenting exemption. Work requirement exemptions are based on “medical frailty,” which is defined differently state-to-state and does not always include mental illness in their consideration of frailty. Many mental illnesses can be accompanied by cognitive difficulties affecting executive function, processing speed, and ability to collaborate and communicate which can impact a person’s ability to navigate the complex bureaucratic systems necessary to verify their work status or exemption. Over 18,000 people have lost Medicaid coverage in Arkansas alone due to the work requirement.

NeedyMeds has Diagnosis Information Pages for various mental illnesses including depression, obsessive-compulsive disorder, and schizophrenia. We also have information for over 5,000 free, low-cost, or sliding-scale clinics throughout the country that offer counseling or mental health services. Search your ZIP Code for mental health clinics near you, or call our toll-free helpline for information at 1-800-503-6897 (open Monday through Friday, 9am to 5pm ET).

We encourage everyone to educate themselves, strive to understand the difficulties people around us live with, and to replace stigma with hope and support. If you or someone you know is suffering from a mental health condition, it is important to know that no one is alone in their struggle. Call for assistance, whether help is needed immediately or long-term.