The following blog post is an American’s first-hand experience of traveling to Mexico to save money on healthcare procedures. Names and exact locations have been changed/omitted, though the details are all true and have been verified by us at NeedyMeds.

It is no secret that healthcare in the United States can be prohibitively expensive. Because of this, many Americans opt to get their healthcare elsewhere.

According to a 2015 report by the US International Trade Commission (USITC), between 150,000 and 320,000 Americans travel abroad every year to receive medical care. For uninsured Americans, the costs are often less than half what it would be in the states — even when including travel expenses.

Americans covered by insurance can benefit from getting healthcare abroad as well. Most insurance plans don’t cover dental work, cosmetic surgery, or prescription drugs. These routine treatments and procedures can cost hundreds or thousands of dollars in the U.S.

I have needed dental work completed for most of my life, with the main factor keeping me from finishing it as an adult being the price. I had unfinished work from my childhood that left me embarrassed and in pain. After getting a number of extractions more than a year ago that cost over $4000 by itself, my goal to save for the restoration was more than I could manage.

This is not to say I hadn’t saved any money, just that it was many times what I had managed to put aside for all the work I still needed done—all of which is needed up front when paying in the U.S. My options were to continue to wait and save and remain in pain and discomfort, or to find a more affordable way to get the dental work I needed. 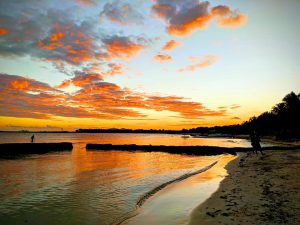 My parents have recently retired to Mexico. Their community is served by a dentist who my mother would start going to, and who she would later refer to me after she saved thousands of dollars on her own restoration work. My partner and I planned a trip for early 2019.

The dentist (we’ll call them Dr. R) studied dentistry in Mexico City and had further advanced training at Tufts, Harvard, and other U.S. universities. The Mexican government subsidizes his practice due to the advanced training he’s received in U.S. schools. With this funding Dr. R is able to buy top-tier equipment that dental practices in the U.S. would often need to make numerous referrals for their patients to access.

Dr. R can make their own temporary crowns, does orthodontistry, and other cosmetic work that patients are usually sent away from their primary care provider to receive. The locals in the community are often not charged for their care, for which Dr. R is able to provide due to the cash that comes in from foreign patients.

My first dentist appointment in Mexico was brief; a few x-rays, imprints of my teeth, some analysis, and making a plan for the next ten days I would be in the area. It’s worth noting here that dental x-rays can cost between $25 and $250 each in the U.S. I was not charged for them or the first hour-long appointment at all.

Dr. R questioned why doctors back home had told me my teeth needed to be extracted, indicating the root and bone was still healthy and that they could be saved with less extreme procedures without the need for future expensive implants. He showed me my x-rays compared to those that required extraction, and it was disappointing to see that mine did look markedly healthier. Even the teeth that had been extracted looked healthier than the ones I hadn’t — I had elected not to extract them sooner because they were front teeth, and I couldn’t afford to replace them at the time. I chose to feel relieved that I was saving what I have left.

The seven root canals were the following morning. Dr. R had called in an endodontist for the procedure, and it took a little less than four hours. I had brought the $2100 that I was quoted ($300 times seven root canals), but was surprised when I was told that the root canals only ended up being $200 each — $1400 for seven 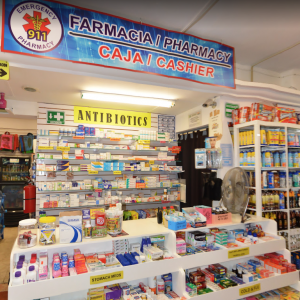 root canals, and Dr. R took the extra $700 I had as an advance payment for the crowns which he assured me would arrive before my flight ten days later. I was given antibiotics for a budding infection (which meant I couldn’t drink alcohol for the remainder of my trip) and painkillers; I was not charged for either.

It may be worth noting that there were no fewer than eight “farmacias” within a five minute walk of my parent’s community. Medications are not regulated the same way in Mexico, and prescriptions can be bought by anyone with the money for them [NeedyMeds’ Note: We do not advocate for the use of non-USA regulated pharmacies, especially mail-order].

Seven root canals are far from comfortable, though after the procedure the pain was minimal. The next morning I returned for the temporary caps to be put on, which (including the time it took Dr. R to make the caps) took a little more than four hours. At the end of this appointment, the doctor told me he wouldn’t be charging me for filling the teeth on the bottom, and that I only owed an additional $2800 after the $2100 I had already paid.

The doctor assured me that if I couldn’t pay the balance for a few months it would be just fine (even though he knew I was leaving the country in a little over a week). This was actually under the amount I had saved and I was shocked to have anything left over.

I had almost a week before my next appointment for the bottom teeth, and the following day would be when the porcelain caps were scheduled to be put on — just one day before I flew back home to New England. There was swelling in my gums that subsided over time and my discomfort mostly waned. I couldn’t drink alcohol, but I had lots of gelato.

One of the smaller things the dentist tried to help me was related to a dog attack I suffered late 2017 (I work in the pet industry), as they noticed a tooth was constantly rubbing against some scar tissue on the inside of my lip. Dr. R offered to elect to reshape/contour the tooth slightly, which would reduce its rubbing on the scarred area of my inner lip. This procedure regularly costs $50-$300 per tooth in the U.S.; I was not charged anything more than we had previously agreed.

At first, it was much more comfortable not rubbing against the scars but as the days went on it became more and more sensitive. By the weekend I could barely breathe through my mouth without the pain in the sensitive tooth becoming unbearable.

The following appointment consisted of a cleaning and five fillings, including the one that was now sensitive. This was probably the most uncomfortable of the appointments for me, as I have always had a resistance to novocaine, though it only lasted an hour. I spent the rest of the evening resting after taking a prescription dose of ibuprofen.

My last appointment was the next morning for my permanent caps. The appointment lasted two hours, during which three bridges with the seven crowns were put in. Other than some soreness in my gums, it was the best they had felt in a long time. Everything looked and felt good on my return trip; it was the first time I can remember being able to chew on both sides of my mouth pain-free.

If I were trying to get comparable work done in my home country of the United States, I would have to be prepared to spend at least $20,000-$25,000 — easily more. I spent under $5000 in Mexico; a little more when you factor in airfare and the costs of living in a foreign country for almost two weeks. I spent a total of 12 hours in a dentist chair. I was not charged for any x-rays, prescription medications, or any office visit fees. 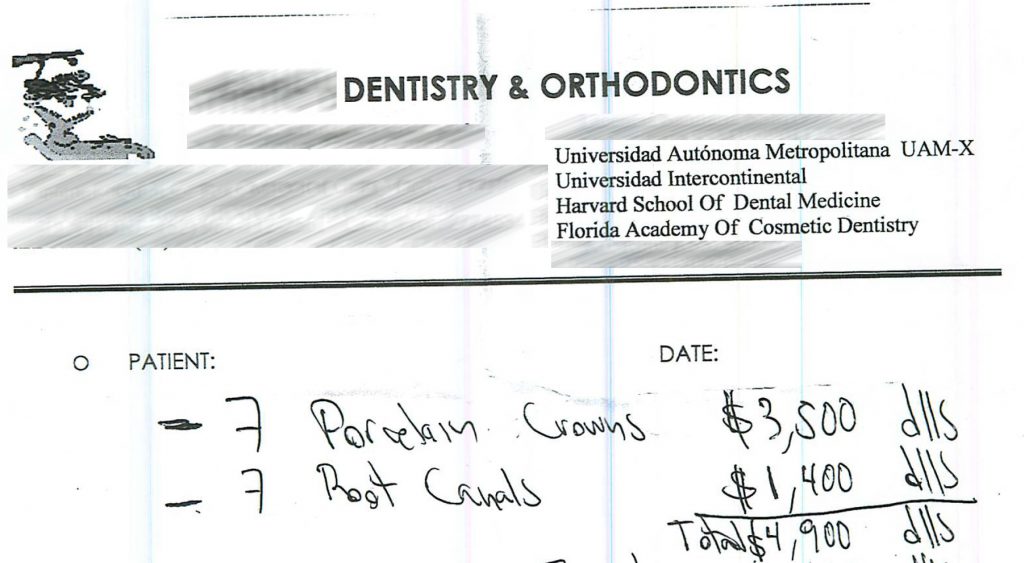 I cannot speak to the practices of other dentists in Mexico — I imagine Dr. R was very generous with his services and I wouldn’t know if not charging for x-rays or medications is common practice. Based on my experience, and lacking any overhauls of the U.S. healthcare system, I would likely go back to Mexico for any further dental work I may need.

NeedyMeds does not have any information about resources that help patients access healthcare outside of the U.S. or its territories, nor do we endorse medical tourism — anyone considering traveling abroad for medical care of any kind should carefully investigate the care provider and/or the hospital providing the healthcare services — but we do have information on free/low-cost clinics and assistance programs that help with the costs of prescriptions and healthcare throughout the United States and its territories. Visit needymeds.org or call our toll-free helpline at 1-800-503-6897.

For those considering seeking healthcare outside of the United States, Joint Commission International (JCI) accredits hospitals, clinics, and other healthcare providers around the world and is considered the gold standard in global healthcare.