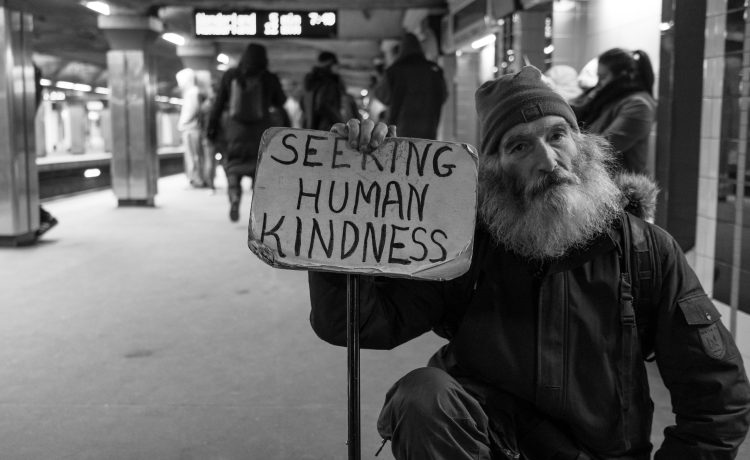 Hunger and Homelessness Awareness Week is an annual observance when people and organizations draw attention to the problems of hunger and homelessness and show compassion for our unhoused neighbors. While the issues are broad and causes are varied, the solutions that have been shown to work (but are rarely employed in the United States) are centered around harm reduction as opposed to increased criminalization.

Being excluded from access to affordable healthcare can be a barrier in itself to getting a job and escaping poverty. Unhoused people face significant barriers when trying to access healthcare and are at high risk for pneumonia, infections, symptoms from exposure, mental illness, and substance abuse. Lack of affordable healthcare on its own can contribute to homelessness. For families and individuals who struggle to pay rent, a serious illness or disability can lead to a downward spiral into losing housing: a person could lose their job due to inability to work, deplete their savings to pay for healthcare, and eventually be evicted from their homes with reduced or no income — and it could happen to almost anyone.

Mental illness is prevalent in unhoused populations, with 25% of people without housing living with serious mental health conditions and an estimated 46% with any mental illness. Several studies have shown that people with mental illnesses often find themselves unhoused primarily as the result of poverty and a lack of low-income housing — not as a direct result of their mental health. Homelessness is often a traumatic event in itself that further influences a person’s symptoms of mental illness. People with untreated mental illness are overrepresented in every part of the carceral system, including deadly encounters with law enforcement.

Beyond the structural violence of society and institutions that prevent marginalized people from meeting their basic needs, unhoused people are often victims of interpersonal violence. People experiencing homelessness are more likely to be victims of crimes such as murder, sexual assaults, beatings, and maiming, as well as harassments such as having things thrown at them or being threatened, intimidated, and discriminated against. Systemic failures often affect unhoused people trying to get justice for violence committed against them, continuing a cycle of dehumanization for vulnerable and marginalized people.

Despite CDC recommendations and reduced resources, unhoused communities have been forced to move encampments or lose what personal property they have to law enforcement sweeps. When encampments become too large after being kettled together, unhoused people are often subject to arrest or involuntary medical care that can disqualify them from housing options and further perpetuates harm. The most cost-effective way to address homelessness is by providing housing. Police response to nonviolent unhoused people and compulsory treatment for alleged addicts are far more expensive and much less effective than addressing the shortage of safe and stable housing. Our failure to meaningfully address homelessness has brought unnecessary financial and human costs to our communities.

One does not need to be unhoused to go hungry. America spends $100 billion on hunger relief every year, but more than 50 million Americans are food insecure. Food insecurity is one of the nation’s leading health issues and is associated with increased risks of birth defects, anemia, diabetes, lower nutrient intakes, cognitive problems, aggression, and anxiety. It is also associated with higher risks of being hospitalized and poorer general health from having asthma, behavioral problems, depression, suicidal ideation, and worse oral health.

Our nation has enough food to feed everyone, but it doesn’t always reach the families who need it most. “Food deserts” are areas where access to affordable healthy food options is limited or nonexistent because grocery stores are too far away. About 23.5 million people live in U.S. food deserts, nearly half of whom are low-income. The number of people living in food deserts may be under-reported due to small corner grocery stores which often primarily sell processed/packaged food being counted alongside supermarkets that sell a variety of fresh fruits and vegetables. People living in food deserts often have a hard time finding foods that are culturally relevant or meet their dietary restrictions, and are more likely to eat low-nutrient fast food. According to the U.S. Department of Agriculture (USDA), Americans waste 30% to 40% of our food supply while millions of people struggle to have enough healthy food.

For those who don’t have access to affordable healthy foods, FoodFinder is a nonprofit food pantry locator that helps find when and where to get free food assistance in your area. For those in need of further assistance, NeedyMeds has nearly 100 disease-specific resource sites for many conditions — Diagnosis Information Pages — including those that disproportionately affect unhoused and food insecure people. Our website has a database of over 17,000 free, low cost, or sliding scale clinics. Search your ZIP code for clinics in your area. There are also free/low-cost clinics listed that offer mental health and addiction services. Some of the programs listed in our Diagnosis Based Assistance (DBA) database even offer meal deliveries. The free NeedyMeds Drug Discount Card can be used by anyone to help save money on their prescribed medication — even over-the-counter medicine that’s been prescribed by a doctor — regardless of housing or immigration status. The card is available physically via mail, in a printable form, or as a smartphone app for Apple and Android devices. For more help finding information, call our toll-free helpline Monday-Friday 9am-5pm Eastern Time at 1-800-503-6897.