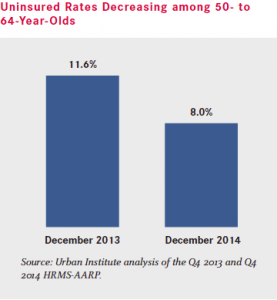 In the past five years since the passage of the Affordable Care Act (ACA), there have been strong supporters and fierce opponents.  No matter what side of the ACA one falls, it’s hard to deny the positive results it has had in some people’s lives. Since 2013, uninsured rate dropped by 31% among Americans ages 50-64.

Elderly Americans are among the most underserved populations in the country, and are at risk of struggling with poverty and disparity in health care.  The ACA expanded access to health insurance coverage to 50- to 64-year-olds through several provisions, including expanding eligibility for Medicaid, subsidies for consumers purchasing coverage through the new health insurance Marketplaces, prohibiting insurance companies from denying coverage or charging higher rates based on medical history, and restricting how much insurers can increase premiums for older consumers.  Prior to the ACA this age group often went without access to health insurance due to high costs, denials based on pre-existing conditions, and limited Medicaid eligibility. 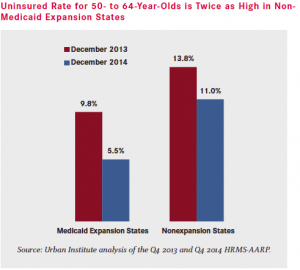 There have been a lot of changes and developments since our first blog post on the Affordable Care Act.  Health care reform continues to grow, and the results are being seen in the improvements in people’s ability to access affordable health care. With the results from the last ACA open enrollment yet to be seen, we hope to see that uninsured rates continue to drop for all Americans in any underserved demographic.