Healthcare in America and Americans’ access to healthcare have faced changes in 2018. There have been Medicaid eligibility changes, laws proposed and promises made to reduce drug costs, as well as public health concerns highlighted such as gun violence. People in the United States continue to count healthcare costs as a major concern. 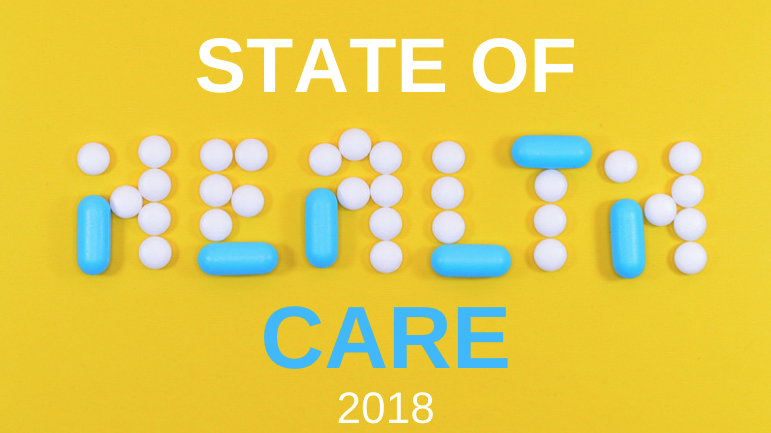 We at NeedyMeds prefer to remain apolitical, but it is difficult to avoid the partisan nature of the changes in healthcare in America. The effort to undermine the Affordable Care Act (ACA; aka Obamacare) was continued with the expansion of short-term health insurance with lower premiums but high out-of-pocket costs and low benefit coverage, weakened benefit standards, cutting the ACA outreach advertising budget by 90%, and a federal court ruling the healthcare law unconstitutional after the Department of Justice declined to defend against the case. The changes have contributed to the rising uninsured rate and costs of care, the loss of benefits for those who need them, and fewer people participating in Open Enrollment. If the federal court’s decision were implemented, it would cause millions of people to lose health coverage and make coverage worse or less affordable for millions more. In the meantime, it is likely to result in confusion, uncertainty, and anxiety for people who depend on the ACA for access to health coverage and care. For now the healthcare law remains in place, pending appeals.

Other changes to U.S. healthcare this year have made it more difficult for people to access care and information. The Department of Health and Human Services (HHS) began approving work requirements for Medicaid requested by states. Arkansas, Indiana, Kentucky, New Hampshire, and Wisconsin have had their new requirements approved, and eleven more have their waivers pending. The changes in policy puts more bureaucratic barriers to cross for those who now have to prove they work, are looking for work, or are exempt from the work requirements. Nearly 17,000 people have lost Medicaid coverage in Arkansas alone due to the work requirement.

In January the HHS Office of Civil Rights changed course from its mission of protecting patients’ rights and formed the Conscience and Religious Freedom Division to protect healthcare workers who would use their religious beliefs as basis to discriminate against patients, jeopardizing the care of pregnant women and LGBTQ individuals as well as others who could be denied certain procedures. Government websites have also removed or altered pages with information regarding women’s health, environmental impacts on health, discrimination protections, and much more.

Some legislation has affected drug prices this year. One piece of good news is The Know the Lowest Price Act and the Patients’ Right to Know Drug Prices Act. Passed by Congress and signed into law this past October, this legislation bans the use of “gag clauses” that prohibit pharmacists from telling patients that lower prices for their prescription are available.

President Trump gave a speech in May with proposals to reduce prescription costs, such as pressuring pharmaceutical companies to include the price of medications in their advertising or publicly shaming companies that increase prices or keep costs high for patients. Market experts saw little potential that the proposals would have an impact on out-of-pocket costs for patients at the time. This week, 28 pharmaceutical companies announced plans to start raising prices on prescription drugs starting in January 2019.

As said, we at NeedyMeds prefer to remain apolitical—we work in a diverse office with people of varying backgrounds and views—but we believe in being informed and that those in need deserve care. It should be clear that NeedyMeds supports improved access to care as well as lower costs for medications and healthcare services for all.

NeedyMeds also encourages Americans to be active in the legislative process. The 116th Congress will be seated in the new year; if you have an opinion on the future of the health care or other important issues in the United States, call 202-224-3121 to reach the U.S. Capitol switchboard; from there you can be connected to your elected House Representative or Senator’s office.

NeedyMeds will continue to provide information as the need for assistance navigating the often expensive landscape of healthcare rises. The NeedyMeds website has databases of Patient Assistance Programs (PAPs), Diagnosis-Based Assistance (DBAs), and Free/Low-cost/Sliding-scale Clinics to help those in need. The NeedyMeds Drug Discount Card can save users up to 80% off the cash price of prescription medications for those without insurance or choose to use the card instead of insurance. In addition to the plastic card, the card is available in a printable form or the NeedyMeds Storylines smartphone app for Apple and Android devices. For more help finding information, call our toll-free helpline Monday-Friday 9am-5pm Eastern Time at 1-800-503-6897.