Medicinal cannabis (aka medical marijuana) is a growing topic in the United States. Today, there are 29 states (plus Washington DC) where cannabis is a legal medical option for patients. Cannabis is mostly prescribed for pain relief but can also be used to treat muscle spasms caused by multiple sclerosis, chemotherapy-induced nausea, lack of appetite from chronic illness, seizure disorders, Crohn’s disease, and more. However, cannabis exists in a legal gray area: while medicinally legal in a majority states, it is federally illegal and considered a Schedule I controlled substance by the Drug Enforcement Agency (DEA)—defined as having no acceptable medical use and high potential for abuse; the same categorization for heroin, LSD, and ecstacy. 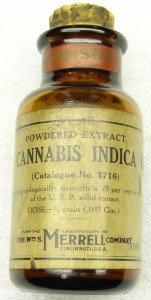 The cannabis or hemp plant can be traced back to Central Asia before being introduced to Africa, Europe, and the Americas. Hemp fiber was used to make textiles used for clothing, rope, paper, and sails for hundreds of years before an Irish doctor found cannabis extracts could lessen the stomach pain and vomiting from patients suffering from cholera in the 1830s. By the late 19th century, cannabis extracts were commonly sold in pharmacies and doctors’ offices throughout Europe and the United States.

Cannabis also has a history of recreational use. Ancient Greek texts describe inhaling smoke of cannabis seeds and flowers, and Middle Eastern and Asian cultures refined the cannabis plant into hashish. Cannabis was not widely used recreationally in the United States until the early 20th century, commonly attributed to immigrants fleeing the Mexican Revolution. Unrest of the Great Depression along resentment of Mexican immigrants and black jazz musicians were contributing factors to the prohibition of cannabis in the U.S. by the 1930s.

The two most prominent compounds found in cannabis are cannabidiol (CBD) and tetrahydrocannabinol (THC). Both CBD and THC interact with the body’s endocannabinoid system—a signalling system regulating pain, appetite, mood, memory, and cellular life-death cycles. The main differences between CBD and THC is whether the cannabinoid will create a euphoric effect. THC is the compound that produces the “high” feeling, primarily interacting with cannabinoid receptors in the brain and nervous system. CBD on the other hand is non-psychoactive and does not produce a euphoria .

CBD is the therapeutic compound in cannabis and can be prescribed to patients with inflammation, pain, anxiety, psychosis, seizures, spasms, and other conditions without side effects. Clinical research has found benefits for those living with arthritis, diabetes, alcoholism, multiple sclerosis, chronic pain, schizophrenia, PTSD, depression, antibiotic-resistant infections, epilepsy, and other neurological disorders. CBD derived from hemp is legal in all 50 states, though CBD products derived from cannabis are only legal in the areas where medicinal marijuana has been legalized.

There are still many questions surrounding cannabis and its medical uses, as earnest research has been limited due to being considered a strongly controlled substance. Rates of cannabis abuse, the levels of physical addiction, and the rising potency of commercially available marijuana are the basis for concern from the National Institute of Drug Abuse (NIDA). States that have legalized medical marijuana have shown a drop in opioid abuse and Medicare prescription costs were seen to fall in states after legalization. Just yesterday, a panel of experts recommended FDA-approval of an epilepsy drug made from marijuana, marking a first time a medication derived from cannabis may receive full FDA approval.

NeedyMeds has limited resources to connect patients with medical cannabis, but one record from our Diagnosis-Based Assistance database is for Realm of Caring. They offer two assistance programs: Realm Cares provides financial assistance for those seeking prescribed and approved cannabinoid treatment when not covered by insurance; and the Joy Fund helps patients looking to move to Colorado for legal access to cannabinoid therapies with a half grant/half interest-free loan.

For others seeking help with prescription costs, the NeedyMeds Drug Discount Card can save users up to 80% off the cash price of prescription medications for those without insurance or choose to use the card instead of insurance for anything picked up from a pharmacy. In addition to the plastic card, the card is available in a printable form or on the NeedyMeds Storylines app for Apple and Android devices. For more help finding information, call our toll-free helpline at 1-800-503-6897 Monday through Friday 9am to 5pm Eastern Time.