Major depression, also commonly referred to as clinical depression, is one of the most common mental illnesses in the United States. Major depression, including major depressive disorder, manic depression, and dysthymia, affect more than 19 million Americans a year. Almost two-thirds of those with depression are women. The symptoms of clinical depression vary, but common symptoms include persistent sad or anxious mood, sleeping issues, reduced appetite, irritability, fatigue, and thoughts of suicide among others. From Mental Health America, “Depression causes people to lose pleasure from daily life, can complicate other medical conditions, and can even be serious enough to lead to suicide.”

There are many causes of major depression, and each case is different. “For some people, a number of factors seem to be involved, while for others a single factor can cause the illness. Oftentimes, people become depressed for no apparent reason.” One common reason is biological, having too many or too few neurotransmitters in the brain. However, genetics, medication side effects, and cognitive problems (i.e. “negative thinking patterns and low self-esteem”) can also trigger depression. 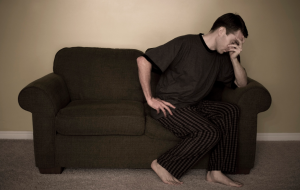 Treatment for clinical depression is different for everyone, being that each case has its own set of causes and symptoms. For many people treatment is quite effective. According to the Mental Health America, “Clinical depression is very treatable, with more than 80% of those who seek treatment showing improvement.” The two most common treatments are medication and psychotherapy.

If you need assistance affording a medication, the first place to check is our Patient Assistance Program listings. These are programs offered by pharmaceutical companies and other organizations to offer medications at a reduced or no cost. For more information on Patient Assistance Programs, check our previous blog post. We also have a Major Depression Resource Page that lists most drugs commonly prescribed for depression along with other resources including national and state programs for depression. On the right side of the page we have highlighted four organizations that provide information on Major Depression – The National Alliance on Mental Illness, Depression and Bipolar Support Alliance, Mental Health America, and Treatment Diaries.

All About Patient Assistance Programs

Depression Awareness Can Save Lives