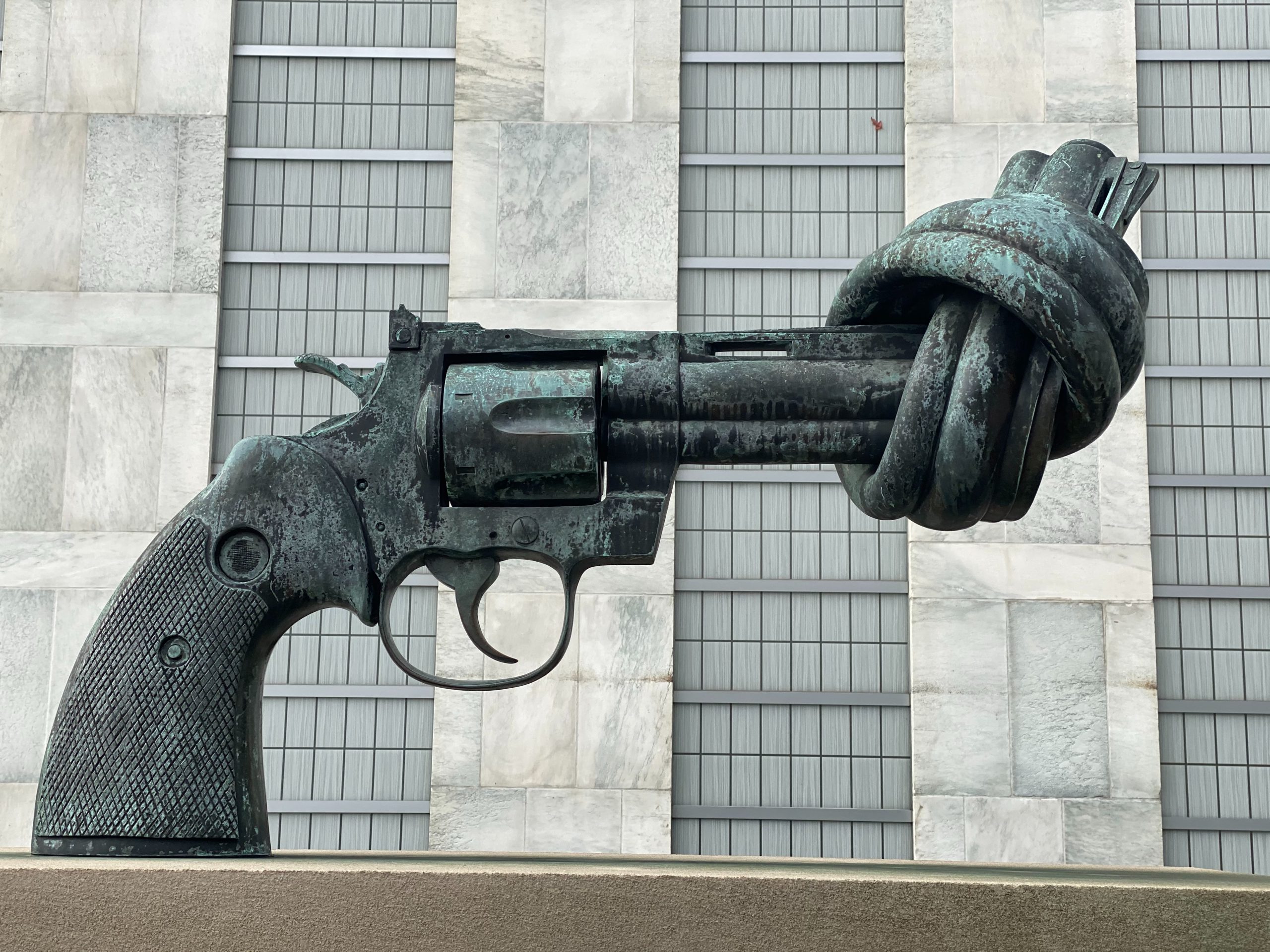 At the time of writing, there have been 230 mass shootings in the past 151 days in the United States. Just from these mass shootings (events when four or more people are shot) 256 people have died and 996 have been injured. More children have been killed with guns than on-duty police officers. The U.S. has already surpassed the number of children killed in school shootings in all of 2021. Of the 20,726 people shot to death last year only 702 died in mass murder events, signifying that guns cause even more harm than we’re often made aware of. The unyielding pressure to “return to normal” has brought with it massacres striking American communities every few days or weeks.

Gun violence is a public health crisis in the United States. The price of lives lost and the consequences for the victims’ loved ones and communities are truly immeasurable. The economic cost, however, can be measured: $229 billion every year; $12.8 million every day. These costs include medical treatment, long-term medical and disability expenses, mental health care, emergency services, legal fees, long-term prison costs, police investigations, and security enhancements. Even students and teachers who participate in active shooter drills can experience profound mental or emotional distress.

Gun violence is a unique problem to the United States among nations not in open warfare or deeply corrupted by criminal organizations. The U.S. consists of less than 5% of the world’s population, though has roughly 45% of the civilian-owned guns on Earth. There are more guns than people in the U.S. When comparing crime on a whole, the United States has an average amount compared to similar countries — the only outlier in U.S. crime is gun violence.

Ninety percent of Americans support universal background checks on gun buyers and over half support registrations, mandatory waiting periods or safety training, reinstituting assault weapon bans, and buy-back programs. Evidence from around the world shows that similar measures work at reducing mass shootings. Despite these facts, gun violence and deaths are often treated as an unsolvable problem by those in power. Instead of looking at the easy access to guns, blame has been routinely shifted to violence depicted in video games for decades regardless of the same forms of entertainment being available in every country. Mental illness is often scapegoated as the crisis at the root of gun violence, despite people with mental illness being much less likely to be the perpetrators of shootings than they are to be the victims. These are distractions to avoid talking about the harm inflicted by guns and how access to guns is the issue setting America apart.

Since 2018, the CDC has openly regarded its information about gun injuries as “unstable or potentially incorrect” by their own standards. Independent researchers have found Americans are more likely to die by an assault with a firearm than riding inside an automobile, and only marginally more likely to die from an accidental gunshot as opposed to being the victim of a mass shooting. Any death by firearm is more likely in the U.S. than the combined risks of drowning, fire and smoke, stabbing, choking on food, airplane crashes, animal attacks, and natural disasters including hurricanes, tornadoes, earthquakes, floods, or lightning strikes. Guns are the leading cause of death for children and teens in the United States.

Gun violence in the U.S. often includes police violence. Every year law enforcement in America shoot and kill more than 1,000 people, with Black people nearly three times more likely to be shot and killed by police than white people. In addition to the loss of life and trauma for survivors, police shootings have a uniquely corrosive impact on the nation. Patterns of state-sanctioned gun violence and response to protests seeking justice significantly reduce public confidence in police. The fear sown by these shootings makes the public less safe with law enforcement unable to do its part without the trust of the community they serve.

The most recent deadly shootings have been met with ineffective and harmful “solutions” calling for more guards/police, limiting access doors in schools, or arming teachers. The presence of an armed guard at the Tops Friendly Market in Buffalo, NY or police at Robb Elementary School in Uvalde, TX did not stop the massacres. Limiting access doors is a fire hazard, and exposes children to a dangerous carceral environment. Adding more guns to classrooms in fact increases the risk of violence, as evidence shows police presence in schools does not prevent shootings but causes long-term harm to students. Mental illness is blamed and stigmatized by the same powerful figures who make mental health care less accessible while making guns more accessible. At an NRA event in the same state as last week’s mass murder, the mental health proposals boiled down to making it easier to incarcerate more people.

Being exposed to gun violence severely harms mental health — not just of the people who are witness to it, but for all Americans who fear for the safety of their children and families. People of all ages, first responders, and even military/law enforcement veterans can face profound emotional trauma in the wake of dealing with the aftermath of shootings that can develop into mental illness. The harrowing stories from survivors of shootings — especially from children — weigh heavily on the conscience of the nation, while an entire generation is traumatized over and over while the conditions that lead to these events remain unchanged.

The prevalence of violence has become normalized in American culture and is sustained by bigotry, conspiracy theories, indifference, corruption, acceptance of mass shootings as an immutable part of our lives, and unjust structures upholding inequities in wealth and power. Gun violence is preventable, but requires a comprehensive public health approach to keep families and communities safe. There are policies that are shown to decrease violent outcomes that are often rejected in favor of laws that increase the likelihood of these tragic events. Curbing police violence and the disproportionate impact it has on communities of color requires confronting the history of racism and structural inequity, reimagining the role of law enforcement in protecting public health, and implementing policies that reduce police gun violence. Doctors advocate for the use of empirical nonpartisan data to ground policy instead of rhetoric.

Up to 75% of young people believe having a gun at home makes them safer. In reality, having a gun at home increases your chance of dying from suicide, homicide, and accidents. In communities where guns are more readily available, people are more likely to be the victim of police-involved shootings, mass shootings, and community-based violence. Despite claims to the contrary, self-defensive gun use is rare. For every justifiable homicide with a gun in 2018, there were 34 homicides, 82 suicides, and two unintentional deaths from firearms. According to FBI analysis, active shooter incidents are rarely stopped by armed individuals who are not law enforcement. In fact, four times as many shootings are stopped by unarmed civilians restraining the shooter.

Education, awareness, and empowerment are vital to saving lives. The more ordinary people feel that nothing we say or do can make a difference, the better the political landscape is for those who would rather do nothing about the conditions Americans face. Nothing fuels this sense of helplessness and despair more than the aftermath of a mass shooting. Our best defense against hopelessness is to do good, and to remember that the good we do matters.

Activists recommend taking a Stop the Bleed course as one of the most effective methods of community self-defense. In the terrifying but all-too-real possibility of being present during a shooting, knowing how to control bleeding can save a person’s life. Courses are available online, and certification is available at in-person classes that take under two hours to complete. It may seem dystopian and can be disheartening to consider, but being prepared to respond to violence by carrying a tourniquet you know how to properly use is one of the only direct actions individuals can take to keep their communities safe from the unpredictable but seemingly inevitable effects of gun violence.

NeedyMeds is a diverse workplace with people of varying backgrounds and views. However, NeedyMeds supports proven measures to reduce gun violence, transparency in events of police violence, and reforms to reduce the impact of social determinants on public health. We encourage all eligible Americans to register to vote and participate in local and national elections. To further engage in the legislature, contact your elected representatives to make your voice heard. Call 202-224-3121 to reach the U.S. Capitol switchboard; from there you can be connected to your elected Congressional Representative or Senator’s office. You can find information for your local and state elected officials by searching online. March For Our Lives protests are also being organized nationwide. Demand Congress pass gun control legislation. Advocate for common-sense gun laws at every level of government.

Get a Flu Shot for National Influenza Vaccination Week