Here at NeedyMeds we regularly refer people to their state’s Medicaid program, and in today’s blog post we are going to explain exactly what Medicaid is and how it functions. Are you currently enrolled in Medicaid? Share your experience with us in the comments section.

How is it Financed?

Medicaid, sometimes called Medical Assistance, is a joint federal and state entitlement program for people with limited income that helps to pay for medical costs. It receives a combination of funding from both the state and federal government. The amount paid to each state by the federal government, also known as the Federal Medical Assistance Percentage or FMAP, varies depending on multiple criteria, notably per capita income. From Medicaid.gov, “The regular average state FMAP is 57%, but ranges from 50% in wealthier states up to 75% in states with lower per capita incomes. FMAPs are adjusted for each state on a three-year cycle to account for fluctuations in the economy.” State participation in the program is voluntary, but currently all 50 states do participate. In most instances, the states pay for services under a fee-for-service or managed care arrangement. Medicaid.gov explains, “Under fee-for-service arrangements, states pay providers directly for services. Under managed care arrangements, states contract with organizations to deliver care through networks and pay providers. Approximately 70% of Medicaid enrollees are served through managed care delivery systems.”

Who does it Serve?

Eligibility for Medicaid varies from state to state, however there are certain groups of people that are guaranteed coverage. “Federal law requires states to cover certain population groups (mandatory eligibility groups) and gives them the flexibility to cover other population groups (optional eligibility groups). States set individual eligibility criteria within federal minimum standards.” One of the most common eligibility requirements is for the patient to be low-income. “The Affordable Care Act of 2010, signed by President Obama on March 23, 2010, creates a national Medicaid minimum eligibility level of 133% of the federal poverty level.” For more information on the federal poverty level guidelines click here. Another requirement is that the patient must be a legal resident and U.S. citizen. Services covered include inpatient and outpatient hospital services, home health services, family planning, and laboratory and X-ray services among many others. 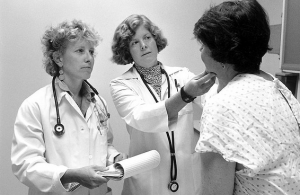 The effects of the Affordable Care Act, also known as Obamacare, have been very beneficial to Medicaid. One major change that has been put into place in 2014 is the expansion of Medicaid eligibility. From Medicaid.gov, “As of January 1, 2014, Americans under age 65 who have income less than 133 percent of the federal poverty level ($14,500 for an individual and $29,700 for a family of four in 2011) who are not pregnant and not otherwise eligible for Medicaid, will be eligible to enroll in Medicaid. This new coverage ends the long-time exclusion of low-income adults from Medicaid coverage.” Other changes include an increase in the Medicaid prescription drug rebate percentage, additional state grants for the Prevention of Chronic Diseases Program, and additional funding to the Children’s Health Insurance Program among many others. For a full list of changes click here.