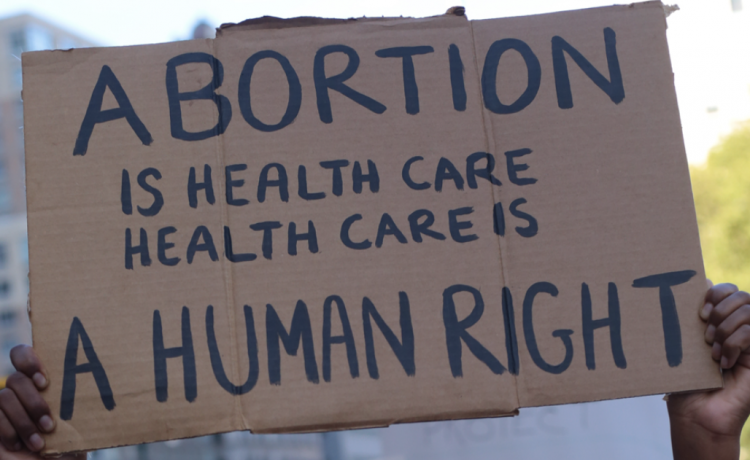 Last week, the U.S. Supreme Court overturned the 50-year-old precedent of Roe v. Wade that guaranteed the right to abortion based on the 14th Amendment’s Constitutional right to privacy. On June 24, 2022, people in waiting rooms in certain states were told they couldn’t go through with their appointment for abortion — regardless of the time spent in travel, money spent following strict screenings prior to terminating a pregnancy, or risk to lives of parents and their children. Some would have to drive hours out-of-state to possibly get an appointment. Some will be forced to carry their pregnancy to term, adding financial stress to already vulnerable families and children.

Abortions are essential healthcare. Multiple studies indicate that the inability to receive abortion care places pregnant individuals further into poverty and harms their health as well as the well-being of their current and future children. Many people lack the means and access to decide whether to continue a pregnancy — particularly communities of color, LGBTQIA people, and residents of rural areas. Being denied an abortion leads to worse physical health, greater economic hardship, lower achievement of aspirational plans, children raised in more precarious economic circumstances, and upending people’s lives.

Approximately one in five people capable of getting pregnant will have an abortion by age 30, and one in four by age 45. Regardless of age, race, income, education level, or parental status, there are innumerable reasons why people seek abortions:

The ability to access abortion in a timely manner is critical to the health and safety of individuals seeking care. Delays in access increases the risk that a person may experience a medical complication and negatively impacts their social, emotional, and psychological well-being. Abortions later in pregnancy also cost more than procedures performed at earlier gestational ages. The average cost of surgical abortion was approximately $495 in the first trimester as compared with $2,225 at twenty weeks of pregnancy. Delays in obtaining care are likely to create dire obstacles in obtaining any care at all for those with limited financial resources.

Abortion is life-saving treatment for several conditions. Ectopic pregnancy, septic uterus, and certain miscarriages are fatal to the mother if not treated with an abortion. Doctors in restrictive states are being told to observe patients with life-threatening non-viable pregnancies until their vitals drop to such a point that healthcare providers hope is enough of a “medical emergency” to avoid criminal charges.

Criminalization of abortion will affect pregnant people, healthcare providers, and anyone the state deems provided support. Investigators can obtain phone records, search history, location data, and information from period-tracking apps to incriminate people who have lost a pregnancy. People from communities that experience heightened levels of policing and state surveillance will be at an increased risk of criminalization. Enforcement of these laws ranges from $10,000 fines for driving a patient to an appointment to incarceration of doctors for providing life-saving healthcare.

In some states, even naturally occurring health outcomes will be criminalized. Miscarriages are almost never preventable, yet state fetal protection laws can make pregnant people criminally responsible for them. Some states even require medically impossible procedures to “save the pregnancy.” These laws treat pregnant people as host bodies without autonomy or equal rights, and cause profound distress to people having physical health complications and families suffering a deep personal loss. Abortion restrictions are even affecting people with totally unrelated health conditions. Some patients have reported being denied filling prescriptions for methotrexate (chemotherapy and immunosuppressive drug) due to its use in treating ectopic pregnancy.

People are facing forced birth in a country with the highest maternal mortality rate, where pregnancies and newborn care for the uninsured costs an average of $30,000 to $50,000 (without complications), with no guaranteed paid maternity leave, no universal/subsidized child care, no continued birth/parent care, and frequently inaccessible mental health care. Pregnant people and their children will die as a result.

The choice to carry a pregnancy to term and become a parent is a deeply private and personal one. Taking away a person’s right to make the decision for themselves puts freedom further out of reach for millions of Americans, and relegates pregnant people to second-class citizens who can have their bodily autonomy taken from them. Women, non-binary people, and trans men are not equal in society if they cannot make the choice to not be pregnant. Personal or religious objections to a safe, standard medical procedure should not be allowed to dictate the terms of another person’s healthcare. Abortion should be accessible on-demand and without apology for all who need them.

The politicization of access to safe and legal abortion care has created a false hierarchy of need and importance that runs along existing fault lines of racial and income inequity, mimicking what access to abortion care looked like before Roe v. Wade. As prior to the landmark case, individuals with wealth and power will rarely lack access to abortions when they need them while low-income and marginalized people — who make up 75% of abortion patients — will have their essential healthcare criminalized.

At the time of writing, abortion is illegal in Alabama, Arkansas, Kentucky, Ohio, Oklahoma, Missouri, and South Dakota with limited exceptions. Wyoming, Mississippi, Idaho, Tennessee, and North Dakota have trigger laws that will completely ban abortion with few exceptions 30 days following the Supreme Court decision. Texas, Arizona, Louisiana, Utah, and Michigan have pre-Roe abortion bans currently being blocked by lawsuits (Texas also has a trigger law that will go into effect in late July). West Virginia, North Carolina, Georgia, Indiana, Iowa, and South Carolina are expected to enact full or partial bans in the coming weeks.

Abortion is protected as a right through the law in Washington DC and 16 states: California, Colorado, Connecticut, Delaware, Hawaii, Illinois, Maine, Maryland, Massachusetts, Nevada, New Jersey, New York, Oregon, Rhode Island, Vermont, and Washington. Even states that have codified the right to abortions could face a nationwide prohibition on essential healthcare if anti-abortion authorities gain control of additional branches of government. We encourage all eligible Americans to register to vote and participate in local and national elections; 469 members of Congress, 36 governors, and over 6,000 state legislators are up for election November 8, 2022. Deadlines vary by state, so be sure you’re registered in time to vote.

To further engage with the legislature, contact your elected representatives to make your voice heard. Call 202-224-3121 to reach the U.S. Capitol switchboard; from there you can be connected to your elected Congressional Representative or Senator’s office. You can find information for your local and state elected officials by searching online. Protests are also being organized nationwide. Demand Congress pass the Women’s Health Protection Act (WHPA) and protect other unenumerated rights of privacy.

Supporting abortion access and reclaiming our civil rights cannot be done alone; it can only be achieved through organizing and collective action. Get involved with a mutual aid group. Donate to local abortion funds, practical support organizations, and independent clinics. If you can’t donate, volunteer. These organizations are likely overwhelmed right now. Follow up, be polite, and remember they’ve been doing this important work for many years. If you can’t volunteer, share good and accurate information so abortion seekers can access care. Abortion Access Front hosted online trainings on July 17, 2022.

NeedyMeds will always support people seeking affordable healthcare — including abortions. Our database of over 19,000 free, low-cost, or sliding scale clinics has more than 7000 of which offer women’s health services including over 450 Planned Parenthood locations. Abortionfinder.org also lists over 700 trusted and verified abortion providers. Avoid fraudulent crisis pregnancy centers. Our Diagnosis-Based Assistance database lists programs with varying eligibility, including some that offer forms of assistance for people seeking an abortion and for those affected by COVID-19. For more resources, check our website at www.needymeds.org or call our toll-free helpline at 1-800-503-6897 9am to 5pm Eastern Time Monday through Friday.

President Vetoes Bill that would Limit Access to Healthcare