Plus: How to lower your drug costs

Americans take a lot of medicines – and many resort to risky behaviors to afford them. That’s according to a recent national telephone poll by public-education project Consumer Reports Best Buy Drugs.  Forty-four percent of Americans take an average of 4.5 prescription drugs; 16 percent say they take 7 or more.

To afford those medications, more than half (57 percent) of those polled reported taking steps in the last year—some of them potentially dangerous—to curb high drug costs. That included not filling a prescription (17 percent), skipping a scheduled dose (14 percent), and taking an expired medication (14 percent). 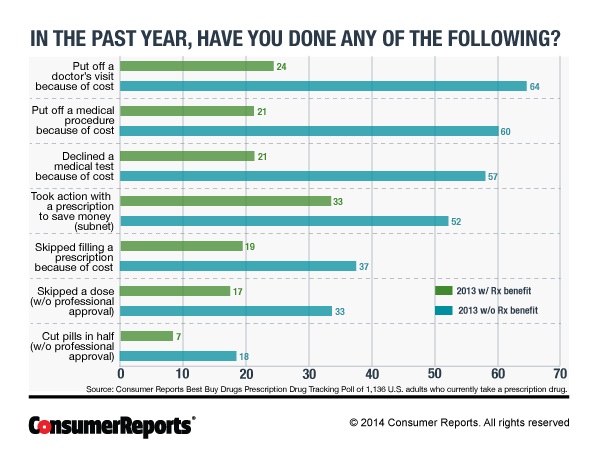 The cost of medications affect people’s wallets in other ways, too. Three in 10 (29 percent) reported cutting back on entertainment and dining out; 19 percent spent less on groceries, and 15 percent put off paying other bills in order to afford their prescription drugs. And, people without drug coverage from their insurance were hit the hardest. 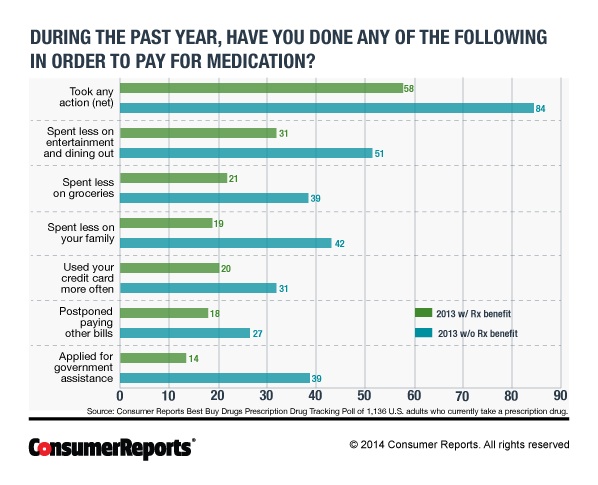 What to do if you face high costs

Don’t wait for your doctor to bring up the cost of medications—he or she may not. Instead,  ask about generics, whether you can stop taking drugs you no longer need, and whether it’s safe to split your pills in half. Also ask about over-the-counter options and nondrug treatments since some may be safer and less expensive over time, and might work just as well as prescription medications. For example, Consumer Reports’ subscribers said in a survey they found massage, physical therapy, and spinal manipulation were better first choices for back pain than muscle relaxants and painkillers—and acupuncture and gentle exercise helped, too. And for certain common conditions—heartburn, insomnia, seasonal allergies, migraine headaches, joint pain—an over-the-counter drug you already have in your medicine cabinet might work as well as a prescription medication. Thoroughly discuss all treatment options with your doctor before he or she hands you a prescription.

Enlist the help of your pharmacist, too, by asking for the lowest possible price on your medication—our Secret Shoppers have found that simple question can get a better deal from the pharmacist. Find out if your pharmacy offers a prescription discount program, and whether your drugs might be cheaper by paying the retail price, rather than using your insurance. Hundreds of commonly used generic medications can be purchased for as little as $10 for a three-month supply at major chain drugstores, big-box stores, and club stores. For example, you can pay $4 for a month’s worth of the generic cholesterol drug pravastatin (Pravachol) 20 milligrams, at Sam’s Club, Target, or Walmart. But many people pay an average retail price of $36 without getting the discount. Your pharmacist may suggest other ways to get deeper discounts as well, such buying in bulk (a 90-day supply instead of a 30-day) or ordering by mail.

Finally check out Best Buy Drugs’ reports. The project rates nearly two dozen common drug classes, including those used to treat allergies, diabetes, heartburn, high cholesterol, and migraines on how well the drugs work, their risk of side effects, and price.

Ginger Skinner is a writer for Consumer Reports Best Buy Drugs, a public education project dedicated to helping you talk to your doctor about prescription drugs, and helping you find the most effective and safest drugs for the best price. To stay up to date on Best Buy Drugs news and advice, connect with them on Facebook, Google+, and Twitter, and sign up for the free monthly e-alerts.