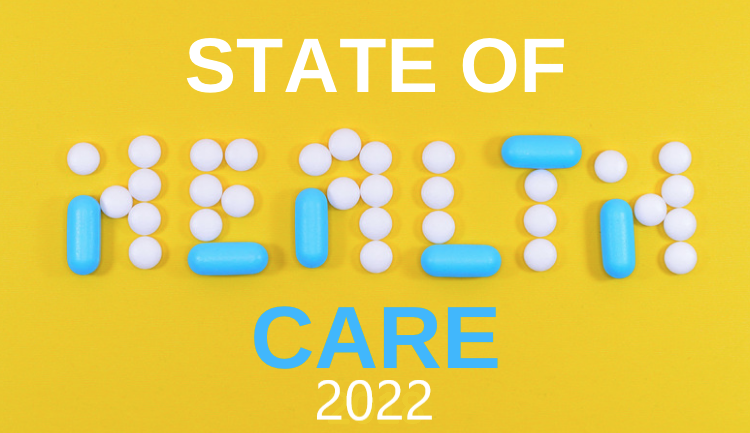 2022 is coming to a close, leaving behind many challenges to healthcare in the United States. The changes to reproductive freedom and attacks on gender affirming healthcare all while the COVID-19 pandemic rages in its third year while being systematically ignored/normalized have greatly affected how people access healthcare and how much it costs. People in the United States continue to count healthcare costs as a major concern.

In the final days of 2021, we were beginning to see the effects of the Omicron variant of the SARS-CoV-2 coronavirus. Even with the new highly transmissible variant, the CDC cut isolation/quarantine recommendations in half. Not supported by any science or biologic data that the coronavirus or our immunity had rendered COVID-19 infectious period shorter, this change was explicitly to reduce the impact on worker availability. Early in 2022, the last states to require masking were eagerly ending mandates statewide including for high-transmission areas such as schools and hospitals.

Shortly after, the CDC introduced its “Community Level” system for masking guidance — newly prioritizing hospitalization figures over new cases and COVID transmission for determining guidelines. Before this change, High risk was considered 100 cases per 100,000 people. After the change, an area with 100 cases per 50,000 people — twice the transmission rate of what was previously considered High risk — can now be considered Low risk based on the percentage of hospital beds occupied and weekly rate of COVID hospitalizations. The effect of changing the heat map of the U.S. from being based on transmission to being based on hospitalizations skewed data to effectively cease masking recommendations for 90% of the population. COVID-19 transmission is the driving factor behind hospitalizations as well as long-term disabilities and chronic illnesses prevalent in as much as half of people infected by COVID-19 — and can even happen in people who had mild or no symptoms. Based on pre-February guidance based on transmission, universal indoor masking should currently be recommended in 91% of counties. Under new guidelines based on hospitalization, universal indoor masking is only recommended in 10% of counties.

In March, the federal program covering COVID treatment for the uninsured stopped accepting new claims without warning — leaving patients who are at higher risk of severe illness and death with out-of-pocket costs that can reach hundreds of thousands of dollars. The following month, a federal judge struck down the mask mandate on public transportation such as planes, trains, and buses. April was also the first month where the majority of people dying from COVID were fully vaccinated and/or boosted. While the risks of severe illness and death are higher for the unvaccinated, the risk to vaccinated people remains very real and should not be taken lightly. By May, COVID cases were largely undercounted as testing sites were closing and patients had been encouraged to use rapid at-home tests. Moreover, May marked the tragedy of one million Americans dead from COVID-19. This number does not include any of the people who died from lack of resources in our overwhelmed healthcare system or those who died from COVID-related conditions in the months following their illness.

That same month saw the release of the leaked draft of the Supreme Court’s decision of Dobbs v Jackson Women’s Health Organization, signifying their intent to overturn the precedent of Roe v Wade granting the right to an abortion based on the 14th Amendment’s Constitutional right to privacy. When the final decision landed on June 24, people in waiting rooms in certain states were told they couldn’t go through with their appointment for abortion — regardless of the time spent traveling, money spent following strict screenings prior to terminating a pregnancy, or risk to the lives of parents and their children. According to projections, roughly 42% of U.S. women of reproductive age will experience a change in distance to the closest abortion clinic. About 75% of people forced to travel farther to an abortion provider will find a way, despite the distance — but 25% won’t. Of those, some will self-induce an abortion, some will miscarry, and some will go on to give birth. If the states expected to criminalize or severely restrict abortion do so, there will be an estimated 50,000 additional births nationwide — many concentrated in some of the worst states for infant and maternal health. People will be facing forced birth in a country with the highest maternal mortality rate, where pregnancies and newborn care for the uninsured costs an average of $30,000 to $50,000 (without complications), with no guaranteed paid maternity leave, no universal/subsidized child care, no continued birth/parent care, and frequently inaccessible mental health care.

After a summer COVID surge, including a positive case and reinfection of President Biden, messaging shifted to characterize COVID-19 infection as inevitable. The Biden administration itself claimed that we are at a point where nearly all COVID deaths were preventable so long as people were vaccinated, up-to-date on boosters, and had timely access to treatment (COVID treatment Paxlovid is only effective in the first five days of symptom onset). The Biden administration also released their plan for Long COVID, which depends on existing (and often insufficient) federal and state programs such as Medicare and Medicaid. At the time of writing, August was the last month breakthrough deaths were reported.

A new bivalent booster protecting against the Omicron variant and the original SARS-CoV-2 coronavirus was released in September (at the time of writing, less than 15% have received a dose). September was also when President Biden declared the pandemic over, remarking on the maskless crowds at the Detroit Auto Show he was attending with 60 Minutes; that same day, more than 900 COVID deaths were reported — over twice the daily average. Biden’s premature declaration was cited as a reason Congress refused to extend funding for the health crisis.

This year marked a number of states passing anti-transgender legislation that dictate public restroom access and sport participation must be based on sex assigned at birth — often requiring bizarre and harmful invasions of privacy such as checking a child’s genitals when their gender is called into question or forcing student athletes to provide their menstrual history — or criminalizing healthcare services for trans people altogether. The characterization of transgender people as a risk to children is a chilling reminder of the same rhetoric used against gay people since the 1950s. The politicization of transgender health has a profound negative effect on the mental health of young people. The attacks against transgender people receiving essential gender affirming healthcare has even extended to hospitals being harassed and healthcare providers receiving death threats from those who believe (or willfully perpetuate) transphobic lies, reminding many of the calls for violence against abortion providers through the 90s and beyond.

As the autumn falls to winter, influenza season has begun early and RSV (respiratory syncytial virus) is also surging causing syndemic conditions of multiple respiratory illnesses. The risks of coinfection of any of these can lead to higher healthcare costs and worse health outcomes. This is all happening while some ”essential workers” are not allowed any unscheduled sick time from work, and the healthcare system continues to be overwhelmed.

Uninsured rates fell to a historic low in 2022, but 23% of working-age adults were still underinsured — insured, but the coverage doesn’t provide affordable access to adequate healthcare. Looking to the new year, the commercialization of COVID vaccines will require uninsured patients to pay over $100 for immunizations. People who are unable to afford vaccines are much less likely to receive them, regardless of personal risk of severe illness. Echoes of debates over “acceptable loss” will become louder as advocates of “returning to normal” place their experience of perceived inconveniences over the very real public health/safety concerns and the risk to lives of chronically ill, disabled, and elderly people. Life expectancy in the United States has fallen to its lowest point in 20 years since the beginning of the pandemic, but getting that back to normal isn’t the priority; the notion of returning to normal is reserved for abolishing mask mandates, vaccine requirements, and limits on workplace/venue capacity. Even as COVID cases are rising, the Biden administration is preparing to officially end the public health emergency which could result in dire ramifications for those who rely on state Medicaid programs enhanced by pandemic funding. Despite being an evidence-based measure to reduce spread of respiratory illnesses, masking has become another focus of the culture wars brewing around abortion and gender affirming healthcare. The political characterization of advocates for improved public health and access to essential healthcare as a danger to society and/or children can have (and has had) devastating consequences.

NeedyMeds’ mission is to educate and empower those seeking affordable healthcare, and we will continue to pursue our mission in 2023. Our website has information on varying resources to help patients access affordable healthcare. Our Free Clinic database of over 19,000 free, low-cost, or sliding scale clinics across the United States and its territories — more than 7,000 of which offer women’s health services, including over 450 Planned Parenthood locations. Search your ZIP code for clinics in your area. Our Diagnosis-Based Assistance database lists programs with varying eligibility, including some that offer forms of assistance for people seeking an abortion and/or gender affirming care, as well as for those affected by COVID-19. The free NeedyMeds Drug Discount Card can also be used by anyone to help save money on their prescribed medication not covered by insurance — including over-the-counter medicine prescribed by a doctor and certain vaccines. The card is available physically via mail, in a printable form, or as a smartphone app for Apple and Android devices. For more help finding information, call our toll-free helpline Monday-Friday 9am-5pm Eastern Time at 1-800-503-6897.

For additional resources, you can use Vaccines.gov to find influenza and COVID-19 vaccinations in your area. GLMA: Health Professionals Advancing LGBTQ Equality has a directory of healthcare providers who are sensitive to the unique health needs of LGBTQIA people in the United States. Abortionfinder.org lists over 700 trusted and verified abortion providers; avoid fraudulent crisis pregnancy centers. For those who need health insurance, Open Enrollment is still available to purchase health insurance for 2023 until at least January 15 (some states Open Enrollment periods end later). If you have questions about signing up or want to talk through your options with a trained professional, free assistance can be reached by calling 1-800-318-2596 or visiting http://localhelp.healthcare.gov.

Healthcare in the 2020 Election