June is Gun Violence Awareness Month. In 2017, there were 39,773 deaths in the United States involving guns; 23,854 were suicides. This is almost 3,000 more people killed with guns than the previous year ⁠— it is an increase of 10,000 from 1999 and the highest it has been since gun mortality data was first recorded in 1979. Nearly 109 people died every single day from gun violence in 2017. For Gun Violence Awareness Month we are highlighting the public health crisis and the barriers that are keeping effective prevention from being implemented.

Before 1996 the Center for Disease Control & Prevention (CDC) was charged with researching gun violence, much in the way that the CDC researched deaths from car crashes and the life-saving effects of seatbelts and child car seats. Following a 1993 study that connected gun ownership with a higher risk of being the victim of a homicide by a family member or intimate acquaintance, the National Rifle Association (NRA) responded by lobbying for the elimination for the CDC’s Center for Injury Prevention. While the Center for Injury Prevention remained, the 1996 federal budget included an amendment proposed by Rep. Jay Dickey forbidding the CDC from “advocating or promoting gun control” as well as cutting their budget by the exact amount the CDC had spent on firearm injury research the year prior. While not explicitly barring the research of gun violence, the language of the Dickey amendment and budget cuts created an environment where few within the CDC were willing to risk their careers by pushing for research that could be misinterpreted as advocating for gun control laws as opposed to advocating for public health. Last year, the CDC has called its information about gun injuries “unstable or potentially incorrect” by its own standards.

Independent researchers have found Americans are more likely to die by an assault with a firearm than riding inside an automobile, and only marginally more likely to die from an accidental gunshot as opposed to being the victim of a mass shooting. Any death by firearm is more likely in the U.S. than the combined risks of drowning, fire and smoke, stabbing, choking on food, airplane crashes, animal attacks, and natural disasters including hurricanes, tornadoes, earthquakes, floods, or lightning strikes. Children in the U.S. are twice as likely to be killed with a gun than to die from cancer.

Gun violence appears to be a unique problem to the United States among countries not in open warfare or deeply corrupted by criminal organizations. There are those that blame gun violence on depictions in movies or video games despite these same forms of entertainment being available throughout the developed world. The United States consists of less than 5% of the world’s population, though has more than 42% of the civilian-owned guns on Earth. When comparing crime on a whole, the United States has an average amount compared to similar countries; the only outlier in U.S. crime is gun violence.

Gun violence is a public health crisis in the United States. The price of lives lost and the consequences for the victims’ families, friends, and communities is truly immeasurable. The economic cost, however, can be measured: $229 billion every year; $12.8 million every day. These costs include medical treatment, long-term medical and disability expenses, mental health care, emergency services, legal fees, long-term prison costs, police investigations, and security enhancements. Even students and teachers who participate in active shooter drills can experience profound mental or emotional distress. 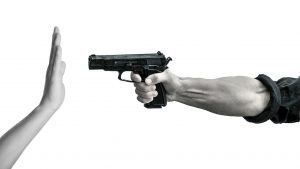 Gun violence is preventable, but requires a comprehensive public health approach to keep families and communities safe. Research can garner insight into the causes of gun violence and assess the impact of interventions; identify risk factors associated with gun violence and protective factors that protect against it; develop, implement, and evaluate interventions to reduce risk factors; and institutionalize successful prevention strategies. Doctors are advocating for the use of hard nonpartisan data to ground policy instead of rhetoric.

The debate on gun rights in the United States is fraught with complexities and strong emotions from all points of view. As a nonprofit healthcare information resource, it is not appropriate for us to comment on all aspects of the debate. We at NeedyMeds prefer to remain apolitical — we work in a diverse office with people of varying backgrounds and views — however, NeedyMeds does support the open and effective research into gun violence and for recommendations to be made in the interest of public health. Without research, any governmental proposals to fix or prevent the gun violence issue in the United States could be formed by baseless conjecture or discouraged altogether. Jay Dickey, the author of the 1996 amendment barring the CDC from “advocating” gun control, later worked with Mark Rosenberg, the author of the 1993 study that incited the NRA lobbying against studies into gun violence, regretting his addition to the legislation and intimated that “We won’t know the cause of gun violence until we look for it.”

NeedyMeds encourages Americans to be active in the legislative process: If you have an opinion on important public health issues in the United States, call 202-224-3121 to reach the U.S. Capitol switchboard; from there you can be connected to your elected House Representative or Senator’s office.