Changes to the ACA in the New Administration

In a previous blog post, we explored the proposed replacement for the Affordable Care Act (ACA; aka Obamacare) known as the American Health Care Act (AHCA). Since then, the bill has been indefinitely tabled after it could not secure the required number of votes to pass the U.S. House of Representatives.

Prior to the new full law being proposed and pulled, the Centers for Medicare and Medicaid Services (CMS) announced changes to the Affordable Care Act exchanges. The new changes include some long-considered ideas to improve the law, including strengthening rules for those signing up for insurance outside the open-enrollment period to ensure that people are not waiting until they are sick before getting coverage.  They’ve also proposed to be more flexible for insurers in the exchanges Bronze level plans to reduce cost burdens as was proposed under Obama.

Other ideas put forward have deviated into some pretty striking departures from previous proposals. The new rules suggest cutting the open enrollment period in half, only running from November 1 to December 15; previously, open enrollment would run until the end of the following January. The new rules also lowers the requirements for the Silver and Gold plan levels, minimizing standards of coverage. The rule notes that the move will increase out-of-pocket costs for Americans in the short-term, but claims that it should lower premiums to offset the increase in the long-term. The new rules would allow insurers to refuse coverage until past-due premiums have been paid. They have also granted insurers more time to submit plans to the federal and state governments to plan their exchange offerings for 2018.

The nonpartisan Center for Budget and Policy Priorities (CBPP) analyzed the proposals and found that lowering standards would reduce the value of tax credits and raise the out-of-pocket costs. The CBPP illustrated a table to show how a family of four with an income of $65,000 with Silver plans could be affected, either by deductibles going up $550 per person or premiums rising $327 per year: 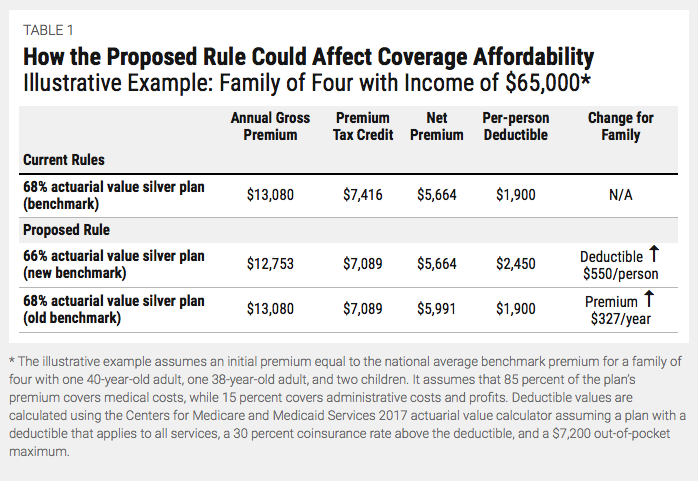