Over recent years, the #MeToo movement has grown to bring sexual violence, abuse, and toxic behavior into awareness within American culture, but there is still much misinformation and stigma to combat to ensure the health and safety of everyone affected. Rape is the most under-reported crime with only 36% of rapes, 34% of attempted rapes, and 26% of sexual assaults reported to law enforcement. Despite misconceptions, the prevalence of false reporting is low — between 2-7%. The consequences of sexual assault reach far into the lives of survivors, families, and communities and have a major effect on public health.

Sex workers (escorts, exotic dancers, adult film actors, nude models, etc.) are often ignored when it comes to sexual violence and have their jobs conflated to sex trafficking in politics and law enforcement, endangering people working consensually in the sex industry. Disregarding the sex worker community in conversations about sexual assault prevention and rape culture perpetuates the stigma and culture of violence that allows violence to be committed — especially against marginalized people.

Victims are assigned blame because of what they wear, how they behave, or where they go — none of which makes one responsible for someone assaulting them. Alcohol consumption is involved in half of all sexual assaults and is often used to shift blame away from a perpetrator, though studies have shown perpetrators of sexual violence report using alcohol at the time of the assault 10-30% more than victims. Negative views about women and anti-social behavior are much stronger predictors of sexual violence than alcohol use. These factors and more contribute to rape and sexual assault being the most under-reported crime in the United States — which in turn fosters more victim blaming.

The Trump administration effectively reversed Obama-era guidelines for college campuses investigating sexual assault, narrowly defining sexual assault as “unwelcome conduct on the basis of sex that is so severe, pervasive and objectively offensive that it denies a person access to the school’s education program or activity” instead of the widely accepted  “unwelcome conduct of a sexual nature.” Trump education officials put protections in place for those who have been accused of sexual assault, require a cross-examination of the victim which can be intimidating and traumatic for survivors, and made it harder to find schools legally responsible for failing to address harassment. President Biden has initiated a review of the Trump admin rules, but changes will be slow and may not address much of the harm already being done to survivors. 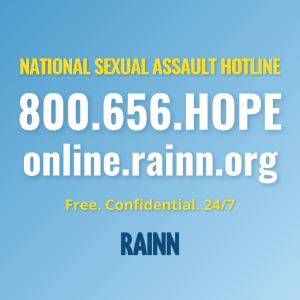 Get Your Flu Shot for National Influenza Vaccination Week